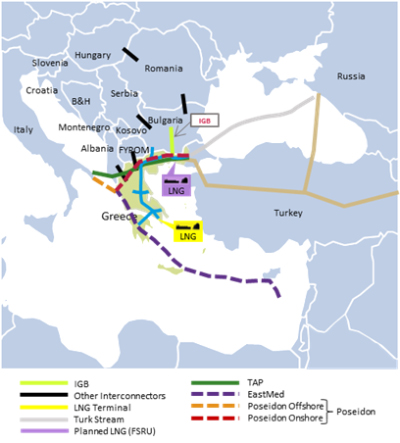 The Interconnector Greece-Bulgaria Pipeline (IGB) project consists of an approximately 182 km long pipeline (approximately 31 km of which are located within the Greek territory), as well as the necessary support facilities (Measuring Stations, natural gas valve stations, Operating Center) . Starting in Komotini, the pipeline arrives at Stara Zagora connecting the natural gas networks of Greece and Bulgaria, while it will also connect with the TAP pipeline and disposes of a reverse flow feature. The IGB pipeline has an initial capacity of 3 billion cubic meters which can be expanded up to 5 billion cubic meters with the construction of a Compression Station.The study, construction and operation of the Project has been undertaken by the ICGB AD Company, which was founded on January 5, 2011 and is based in Sofia, Bulgaria. The Shareholders of ICGB AD are the Bulgarian State Company Bulgarian Energy Holding (BEH) (50%) and the Greek IGI POSEIDON (50%), in which DEPA INTERNATIONAL PROJECTS and the EDISON S.p.A participate in equal shares.

The IGB enjoys the total support of the Greek and Bulgarian Governments and for both countries it is a project of national importance and public interest (Greece: Law 4001/2011, Article 176, Bulgaria: Bulgarian Cabinet Decision No 452 of 07.06.2012). In order to ensure its swift realization Greece has included the IGB in its national list of fast track projects. Endorsed by the EU, the IGB is a Project of Common Interest (PCI) and a priority project of the Central and South Eastern Europe Gas Connectivity Initiative (CESEC).The IGB is also recognized, as a project of national significance and of public interest by the Greek parliament.

In 2018, the European Commission confirmed that plans supported by Greece and Bulgaria, to support the construction and operation of a natural gas interconnector - including a fixed corporate tax regime - are in line with EU State aid rules. The IGB will also benefit from a 45 million euro contribution from the European Energy Program for Recovery (EEPR) and a direct financial contribution from the Bulgarian Operational Program Innovation and Competitiveness. Furthermore, the Regulatory Authorities of Greece and Bulgaria, with the approval of the European Commission, granted the IGB an Exemption from Third Party Access rules (TPA Exemption) and other provisions of the Third energy package.

The IGB’s Final Investment Decision was taken on 10 December 2015. On May 22 2019, the IGB’s Groundbreaking ceremony took place in Kirkovo, near the Greek-Bulgarian border. In October 2019, the Intergovernmental Agreement between Greece and Bulgaria, which establishes the tax regime for the project for a 25 year period, was signed by the Ministers responsible for Energy, Mr. Konstantinos Hatzidakis and his Bulgarian counterpart Temenuzhka Petkova. The construction of the project is underway and is estimated to be completed by July 2021.