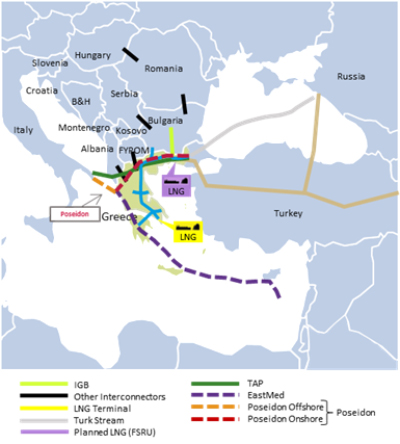 The interconnector Greece - Italy POSEIDON pipeline, with an initial capacity of 12 cubic meters per year and the possibility of increasing up to 20 cubic meters per year, consists of two sections: the 760 km on shore section which starts at the Greek-Turkish border in Kipi and crosses through the regions of Eastern Macedonia and Thrace, Central Thessaly, Central Macedonia, and Epirus, reaching Greece’s Ionian shore in Thesprotia, and the 210 km offshore section which stretches across the Mediterranean to the vicinity of Otranto in Italy.

Poseidon connects to the EastMed project on the Greek coast in the Thesprotia region, and it is crucial for the delivery of gas from the Eastern Mediterranean to Italy and beyond on the European continent.

Poseidon is a mature project with all major studies and licenses necessary for its development completed, while the schedule for its realization is aligned with the EastMed pipeline.

Together with the EastMed pipeline, Poseidon is critically important for the EU’s Southern Gas Corridor, security of supply and European energy market, since it enables access to natural gas sources not currently available to Member States, thereby enhancing competition and exerting a downward pressure on prices which leads to greater market integration. Is an EU Project of Common Interest and, is also recognized, as a project of national significance and of public interest by the Greek parliament.