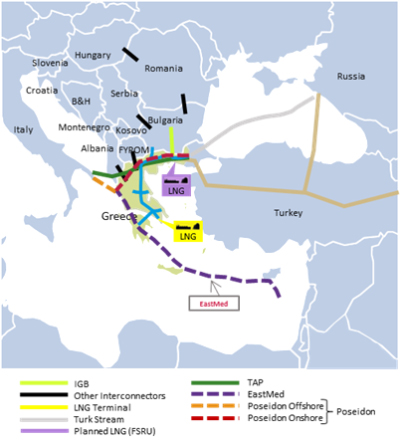 The project consists of an approximately 1,900 km long pipeline with offshore and onshore components directly connecting East Mediterranean resources to Greece’s mainland via Cyprus and Crete, and via an interconnection with the offshore Poseidon pipeline, to Italy and beyond. In conjunction with the Poseidon it will transport gas to Italy and other European markets, including in South East Europe, contributing to European security of gas supply and ending the isolation of Cyprus and Crete from Europe’s gas markets. The EastMed project is recognized, as a project of national significance and of public interest by the Greek parliament and is an EU Project of Common Interest (PCI). It has been allocated co-funding from the EU’s Connecting Europe Facility with grants for both the pre-FEED ( maximum EU contribution: ibution: re-FEED (PCI)ignificance and of p contribution: €34,500,000).

The pre-feasibility studies concluded that the project is technically feasible, economically viable and commercially competitive and significantly, complementary to other export options, including with LNG.

Currently studies to further develop the project are being carried out with the support. These include the FEED for the onshore, offshore and facilities, the Deep Marine Survey and the necessary environmental studies, while the tender for the Engineering, Procurement, Installation and pre-Commissioning activities for the offshore sections of EastMed Pipeline Project is underway. Once completed the information required for the Final Investment Decision will be available. It is estimated that the project could be completed in 2025.

Enjoying the support of the EU as well as of the countries concerned by its development, in January 2020 Cyprus, Greece and Israel signed, an Intergovernmental Agreement providing the framework for the EastMed’s realization, which was welcomed by Italy.

Market integration: Ends isolation in an economically efficient manner providing a direct physical connection, with reverse flow between Cyprus and the continental EU gas market via Greece. The EastMed enables
- The integration of Cyprus to the continental EU gas market, enhancing interoperability and allowing its access to the benefits of the single market;
- The gasification of Cyprus and Crete, by providing access to the gas reserves of the Levantine basin, and to gas from the continental EU gas market; overcoming dependence for power on costly imported petrol products, triggering cost saving from switching oil with gas, and reduction of CO2 emissions and promoting price approximation and progress towards the EU’s energy and climate goals for a lower carbon economy;